Handheld gaming PC maker AYA says its first models powered by AMD Ryzen 7 6800U processor and Radeon 680M graphics will begin shipping in December. Customers in China may get their hands on units in November.

The AYA Neo 2 is a handheld computer with a 7 inch display, at least 16GB of RAM and 512GB of storage, built-in game controllers, and Windows 11 software (as well as support for a Linux-based OS called AYA Neo OS. Meanwhile the AYA Neo Geek is a cheaper model with a similar design, but a few changes meant to make this device a little more affordable. Both should go up for pre-order soon.

Both devices, for example, have fingerprint sensors, gyroscopic motion sensors, vibration motors, and PCIe NVMe solid-state storage, but the AYA Neo 2 has motion sensors in both the body and handles, a higher-quality vibration motor, touch-to-wake support for the fingerprint sensor, and a PCIe 4.0 SSD by default. It’s also slightly thinner and all models come with a 1920 x 1200 pixel display (while only higher-priced versions of the AYA Neo Geek have a full HD screen). 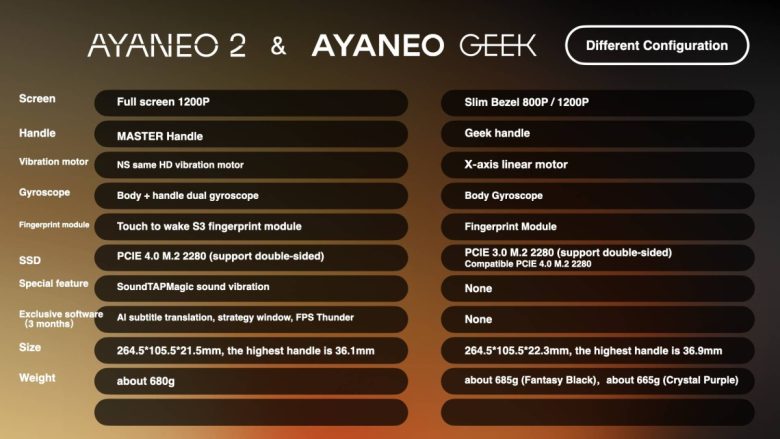 Common features across both models include 50.25 Wh batteries, support for up to 32GB of LPDDR5-6400 memory and up to 2GB of PCIe 4.0 NVMe SSDs (you’ll need to supply your own with the Geek though, as it ships with a PCIe 3 SSD), support for WiFi 6, and Bluetooth 5.2.

Both handhelds have stereo speakers, dual microphones, and a 3.5mm audio jack. And both have three USB Type-C ports (two of which are USB4 ports with support for external graphics docks or other high-speed accessories).

And both have hall sensors for their joysticks and linear trigger buttons for precise control while gaming.

AYA, which is based in China, says the Neo Geek will go up for pre-order globally soon through an Indiegogo campaign, while the AYA Neo 2 will be available for purchase from the company’s website.

Here’s an overview of pricing for each model and configuration:

While those prices make AYA’s newest handhelds substantially more expensive than Valve’s Steam Deck (which sells for $399 to $649), these systems also have faster processors, higher-performance graphics, a more compact body, support for a higher-resolution display, and Windows software, among other things. AYA is also a much smaller company than Valve, which makes it difficult to compete on price.

You can see how AYA’s new handheld compare with the Steam Deck and other handhelds in Liliputing’s handheld gaming PC comparison.

A few more details about pricing and configuration options: the standard versions of the AYA Neo 2 listed above come in either black or white. But there are also a few special edition models with custom color schemes and specs:

Liliputing’s primary sources of revenue are advertising and affiliate links (if you click the “Shop” button at the top of the page and buy something on Amazon, for example, we’ll get a small commission).

But there are several ways you can support the site directly even if you’re using an ad blocker* and hate online shopping.

Contribute to our Patreon campaign

* If you are using an ad blocker like uBlock Origin and seeing a pop-up message at the bottom of the screen, we have a guide that may help you disable it.