The rumor from Angstronomics on possible lower core count for Navi 32 GPU has now been indirectly confirmed by AMD.

The site alleged that Navi 32 GPU has 30 Workgroup processors instead of the previously rumored 32. This means that the CU (Compute Unit) count is not 64 but 60. Exactly this number is now mentioned by AMD developers for ROCm software in a file called “performance.hpp” published 2 days ago. 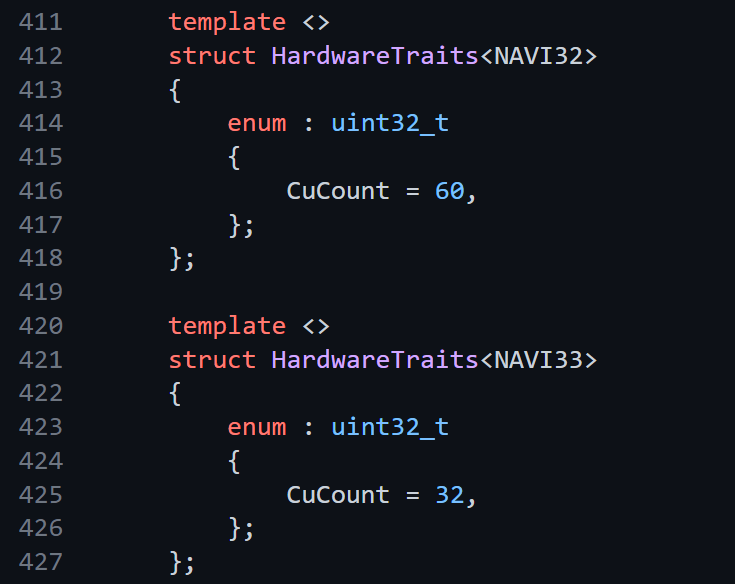 Furthermore, the same core refers to Navi 33 GPU with CU count of 32, which matches previous rumors as well. Given what we already know about RDNA3 architecture, this means that full Navi 32 GPU offers 3840 Stream processors while Navi 33 has 2048 respectively.

Not much has changed since August leaks, the rumored specs, especially from Angstronomics have been very accurate. The only change that we had to implement to our spec chart is higher memory speed (from rumored 18 Gbps to 20 Gbps) and PCIe Gen4 support instead of Gen5.

A bigger question is where will Navi 32 and 33 actually land in terms of Radeon SKUs. The Radeon RX 7900 desktop series appear to be exclusively based on Navi 31 GPU, while Navi 32 may very well be launched as Radeon RX 7800 desktop GPUs and possibly as laptop RX 7900M GPU.

Therefore, it is expected that AMD will talk more about Navi 32 GPU at CES 2023 in January. At the event the company very likely to reveal its Radeon RX 7000M series alongside new Ryzen 7000 laptop.