This weekend’s Antofagasta Minerals Copper X Prix marks a step into the unknown for Extreme E, as it holds its first ever race in South America. 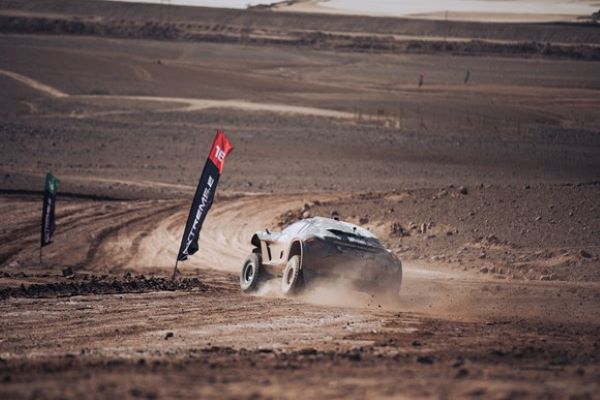 Antofagasta, Chile, is the setting for what promises to be a thrilling fourth round of Extreme E Season 2 and a step into the unknown for the ten teams looking to find glory in the Atacama Desert. 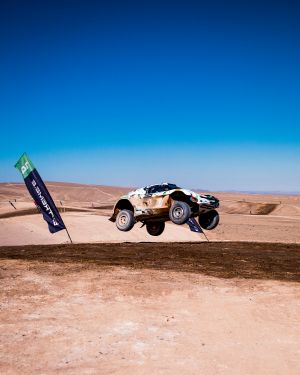 Championship leaders, Rosberg X Racing (RXR), have been in imperious form so far this season, having secured 75 points after winning two of the three X Prix of 2022. Claiming yet another victory this weekend (24-25 September) will ensure the remarkable feat of back-to-back Extreme E titles with one round still to go.

Nevertheless, there will be plenty of opposition for them out on track, with just two points separating second and fourth in the standings. No.99 GMC Hummer EV Chip Ganassi Racing (43 points), ACCIONA | SAINZ XE Team (42 points) and X44 Vida Carbon Racing (41 points) will be keen to ensure the championship battle goes down to the wire in Uruguay (26-27 November).

Such is the shorter layout of the course in Chile that each driver will complete two laps each during the races – treating viewers to a four-lap fight out on the course where tactics and race craft will be more crucial than ever. 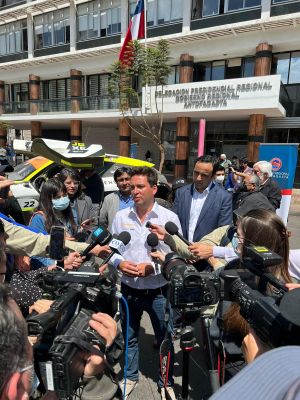 Alejandro Agag, Founder and CEO of Extreme E, said: “I am thrilled that our first ever race in South America is finally here.

“Racing in Chile is going to be a unique experience for our championship and we must pay tribute to those who have welcomed the series to the continent and have been enthused with what we are trying to accomplish. I look forward to seeing some exciting wheel-to-wheel action out on the course – I have been given a sneak preview of the course and I think the fans are going to love it!” 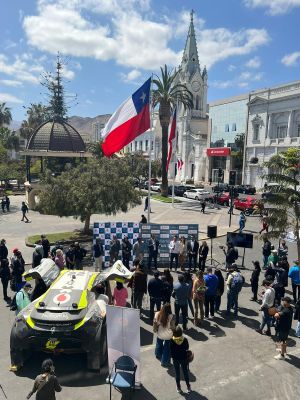 There they gave the locals their first taste of Extreme E, highlighting the importance of the fight against climate change and the key role of the region of Antofagasta.

As part of the event the regional governor of Antofagasta, Ricardo Díaz, proposed the city as the capital of electromobility – fitting for Extreme E’s first Chilean X Prix.

James Taylor, Chief Championship Officer, said: “We have raced in extreme parts of the world, in Saudi Arabia, Southern Italy, and now in Antofagasta, Chile. We chose this city because of the importance of copper for electric cars, as well as how the region has become a leader in materials that help fight climate change.” 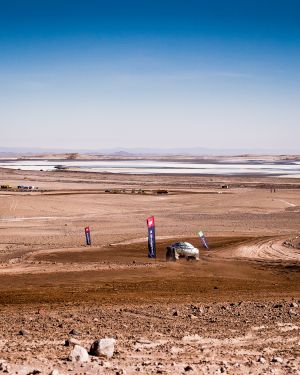 Antofagasta Minerals, Extreme E’s hosts for the Antofagasta Minerals Copper X Prix, and its Centinela operation are on a mission to develop mining for a better future and will use the event to showcase their innovative, sustainable and inclusive methods which are transforming this crucial industry.

Situated north of the capital, Santiago, the city of Antofagasta is closely linked with mining activity. Since the mid-19thCentury, copper mining has dominated the focus of the area, but more recently has shifted towards one of innovative and sustainable mining.

The race itself will take place within the Atacama Desert, south of the Centinela mine, which is 700 miles north of capital, Santiago. This is the driest (non-polar) region in the world.

Extreme E’s decision to race in this part of Chile was instigated by the challenging climate issues that this region is facing, in addition to shining a spotlight on the Copper industry and its importance to electric vehicles.

Agag added: “Every Extreme E race seeks to launch a message, and in Chile it is the importance of raw materials for the transition in mobility and the transition to sustainability.

“Copper is undoubtedly one of the raw materials that will play the most important role in the transition to electric cars. An electric car uses four times more copper than a normal car (a combustion car), because we hope that soon electric cars will be the normal cars. This is why copper is such an important part of the necessary mobility transition.

With the series stepping into the unknown, GridPlay will be crucial at the Antofagasta Minerals Copper X Prix. 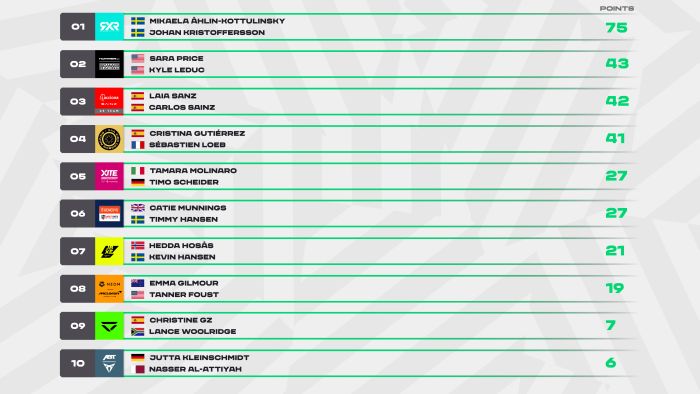 Of the Extreme E grid, only four have raced in Chile previously. However, given the nature of the series plus a totally new location, any previous background knowledge will go out of the window for the Antofagasta Minerals Copper X Prix.

With the difference in altitude, unique terrains, more laps and a brand new course to contend with, Extreme E’s South American racing debut promises to be a special one… and we can’t wait! Find out where you can watch the action here.


Last season’s Extreme E Championship Driver, Tamara Molinaro, is now a podium finisher in the series, having secured XITE ENERGY Racing’s best-ever result at the Sardinian double-header. Extreme E caught up with the Italian keen for a repeat in Chile. more >>


With two wins from the first three X Prix of Extreme E Season 2, Rosberg X Racing (RXR) are currently favourites to win consecutive championships. Ahead of the Antofagasta Minerals Copper X Prix, we caught up with RXR’s Mikaela Åhlin-Kottulinsky to find more >>

Despite demonstrating ABT CUPRA XE’s potential throughout Season 2, it has been a difficult debut campaign in Extreme E for Nasser Al-Attiyah. As excitement builds ahead of the series’ first X Prix in South America, Extreme E caught up with the four-time Dakar Rally winner who is kee more >>


The Extreme E teams hoping for a turnaround in Chile

As the series heads to Chile for the penultimate X Prix of Extreme E Season 2, those ranked eighth to tenth in the Championship have nothing to lose as they look to climb up the Championship standings.NEOM McLaren XE, Veloce Racing and ABT more >>


Midfield teams hunting for an Extreme E podium in Chile


Why Extreme E is racing in Chile’s Atacama Desert


As Extreme E heads to the Atacama Desert in Chile (24-25 September) for the Antofagasta Minerals Copper X Prix, the penultimate round of Season 2, we take a look at the challenging climate and environmental issues that this South American region faces. more >>


Quotes on Extreme E launch Racing for All initiative


•    Joan Orús, Team Principal of ACCIONA | SAINZ XE Team: “Everyone deserves an opportunity and with the Racing for All initiative, Extreme E is proving once again that it is the world’s most socially responsible motorsport champion more >>


Extreme E is pleased to announce the launch of its new Racing for All initiative, informed by the findings of The Hamilton Commission, which will create opportunities for a new generation of mechanical and engineering talent to join the world’s most radical off-road electric racing series. more >>

A year on from the Ocean X Prix in Season 1, Extreme E returned to Lac Rose, Senegal, as part of its continued commitment to fighting climate change and supporting communities in the area.The vast expanse of the Atlantic was a scenic backdrop for the second e more >>


Extreme E – What is it like to race in Chile?


Extreme E will compete in South America for the first time at the Antofagasta Minerals Copper X Prix in Chile later this month (24-25 September). The event will mark a step into the unknown for the series, however four of the Extreme E grid have more >>


FOX look back on their Extreme E debut


The NEOM Island X Prix double-header in Sardinia, co-organised by the Automobile Club d’Italia and Regione Sardegna, marked the first Extreme E race for FOX, the Championship’s Official Suspension Partner. We caught up with Bryan Harrold, FOX Motorsports Program Manager, to look back on more >>


Onwards and upwards for Veloce Racing after a challenging double-header


Following an extended break after the first X Prix of Extreme E Season 2, the on-track action resumed with two rounds in one week at the NEOM Island X Prix, co-organised by Automobile Club d’Italia and Regione Sardegna.The action-packed Sardin more >>


From Championship Driver to XITE ENERGY Racing driver, Timo Scheider was thrown in the deep end as he took on his first race at Extreme E’s first double-header, co-organised by Automobile Club d’Italia and Regione Sardegna.The German was c more >>


The Sardinian double-header promised us double the action and double the excitement. It delivered, showcasing some of the best wheel-to-wheel duels in Extreme E to date.The narrow and intricate course on the Italian island encouraged some thrilling battles as the 20 world-class drivers pushed each other to the limit. We’ve picked out just three of more >>


The concept of ‘Scope F’ looks to explore and articulate sports’ influence on the greenhouse gas emissions of fans in their daily livesA report released by the Planet League, supported by Extreme E, brings a new term to the fore as sport continues t more >>


Extreme E, the sport for purpose electric racing series, is pleased to announce it has extended its partnership with Neat Burger, who are now the Championship’s Official Vegan Partner.
Neat Burger is one of the world’s fastest growing more >>


Juan Pablo Montoya, Dario Franchitti and Alex Zanardi are just some of the star-studded names who have been victorious driving for Chip Ganassi Racing. In Sardinia, Kyle LeDuc and Sara Price added their names to the illustrious list. For more >>


Extreme E, the pioneering electric off-road racing championship, partnered with XITE ENERGY, who became its Official Drink Supplier, in Season 1. XITE ENERGY, which was founded in Bristol, UK, and is still only a few years old, has already made huge waves i more >>


Kevin Hansen on his return to racing in Sardinia


The NEOM Island X Prix double-header in Sardinia marked the return to racing of one of the Championship’s leading lights – Kevin Hansen. We caught up with the JBXE driver as he got back behind the wheel of his ODYSSEY 21 for the first time since injuring his back at the season opener in NEOM, Saudi Arabia. more >>


Fraser McConnell: “It was an honour to be involved”


After Timo Scheider was signed up to race for XITE ENERGY Racing in the NEOM Island X Prix double-header in Sardinia, a vacancy opened for a Championship Driver. Enter Fraser McConnell. We caught up with the Jamaican after an impressive first week behind-the-scenes with Extreme E. more >>